Lectio praecursoria. Eero Saarinen wrote of his Trans World Airlines Terminal: “We wanted architecture to reveal the terminal, not as a static, enclosed place, but a place of movement and of transition.”[1]

In my dissertation “Laboratory for a New Architecture: The Airport Terminal, Eero Saarinen and the Historiography of Modern Architecture,” I discuss the airport terminal in relation to the history of architectural modernism. Saarinen’s Trans World Airlines Terminal, built between 1956 and 1962 at the John F. Kennedy Airport in New York, and Dulles International Airport, which serves Washington D.C. and was completed in 1963, were the first airport terminals to enter the annals of modern architecture. Yet, curiously, Saarinen’s Athens International Airport, built between 1958 and 1969, was not mentioned in the canon of influential modernist buildings. The research question I address in my dissertation is, why the airport terminal was not included in the histories, when it, as a typical 20thcentury building type, developed simultaneously with the institutionalization of modern architecture? 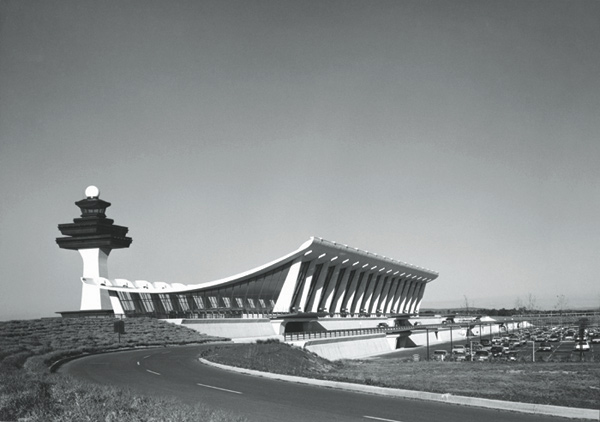 I hypothesize that the airport was overlooked because it was seen as infrastructure, and not architecture. Furthermore, its transient modernity did not coincide with the aims of historians, who could not utilize an emergent building type to demonstrate how modernism revolutionized architectural vocabularies. Discussing the related histories of aviation and technologies, the imaginaries of aviation, the typological instability of the airport terminal, and Saarinen’s architectural practice, I utilize genealogy, microhistory, and Science and Technology Studies to intervene in the historiography of modern architecture. Specifically, I question the assumption that architecture follows technological developments, the narrow interpretation of modernity dominating the writing of architectural history, and the resulting myopia in the classification of emerging building types.

Examining the airport terminal in relation to modernity and technology, I claim that science, technology, and architecture are similar cultural constructions within larger cultural patterns and confront the techno-deterministic idea of their parallel development trajectories. The seminal histories of modernism nurtured an idea of architecture being the true expression of modern engineering, and a new scientific worldview. Historians’ view of modernity emphasized continuous and harmonious progress instead of transience, crisis and disintegration, which were other aspects of the processes of modernization. In addition, their view of technology was uncomplicatedly positive. Despite the airport terminal being related to the progressive technology of the airplane, it became a curious blind spot in most accounts of architectural modernism. Therefore, the history of the airport terminal is only discovered in other types of documentation, such as the histories of technology and aviation, cultural histories addressing the imaginaries of aviation, and design manuals for the emerging building type. Especially early modernists like le Corbusier, were fascinated with aviation and wrote vividly of their impressions and experience onboard the early aircraft.

The Typological Instability of the Airport Terminal

Based on this documentation, I narrate the story of the airport terminal, exposing its typological instability and alternative development patterns. The timeframe of my study extends from 1909, when the pioneering aerodromes were built for the first flying events, to 1969, which is the completion date of my third case study, the Athens Airport, and the year when jumbo-jets entered commercial service and the supersonic Concorde flew for the first time. The airport terminal developed from the architecture of the early aerodromes, and airfields of the twenties, to a recognizable building type in the thirties. Airports were frequently rebuilt to meet the changing demands of aviation and while some early air stations were functionalist, others represented stylistic and regional variants of modern architecture such as Art Deco, streamlined modern, Italian rationalism and Scandinavian modernism. 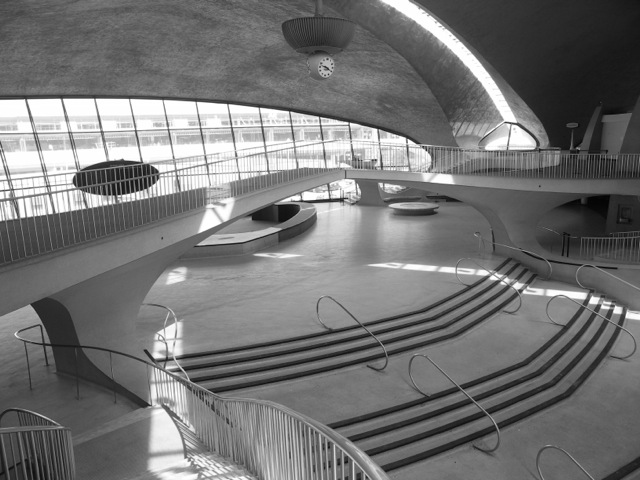 After the Second World War these so-called “three generations” of airports were followed by the “fourth, fifth and sixth generation.” Criticizing the idea of a development trajectory embedded in the concept of generations, I suggest that airports be instead classified by their organizational characteristics as the centralized and decentralized airport type, and further, by their operational system as the gate arrival, finger and satellite terminal. The basic difference between the centralized and the decentralized airport terminal type is that in the centralized model, airline counters, waiting areas and baggage handling are gathered in the main section of the terminal, whereas in the decentralized model a series of separate but interconnected units or satellites serve one or few airlines. While the former system facilitates central management and transfers between airlines, carriers often favor the latter, as it allows individualized customer service.

In the gate arrival terminal passengers walk directly from the gate to the aircraft parked on the apron. They may also be transported with a bus or a mobile lounge as at Dulles International Airport. In the pier finger terminal fingerlike concourses are connected to the aircraft with extendable and adjustable gangways – or open walkways as at the Athens International Airport. And in the satellite terminal, concourses and tunnels connect the main terminal into satellite buildings and aircraft parked around them – as in the TWA Terminal. In my view, the so-called “fourth-generation” airport denotes the centralized gate arrival or finger terminal of the forties and fifties, the “fifth-generation” airport refers especially to the decentralized satellite terminal built for the wide-bodied jets of the sixties, and the “sixth-generation” airport is the typical airport terminal of the seventies, when safety concerns resulted in the separation of open and secure areas.

Instead of following a predetermined development pattern, the terminal building was shaped by techno-social processes – including the changing logistics of air travel, the emergence of different propeller planes and jets, the construction and orientation of runways, and the airport’s urban location – which enforced certain formal and technical solutions while others stagnated. The visibility of these alternatives questions the idea that architecture developed along technology, and reveals various modernist discourses and technological possibilities that were present when modern architecture was invented. It is in this sense, following these alternatives, that I claim the dominant techno-deterministically defined modernism could be “uninvented.”[2] This would allow the histories to include the airport terminal as a building type that represents variants of architectural modernism and has a unique – and not simply causal – relationship to technology. After all, the airport terminal is the very avatar of technological modernity, without which the narrative of modern architecture is incomplete.

Evaluating the state of postwar architecture Saarinen claimed in 1953: “The new architecture can be likened to a new product not yet on the assembly line, but well under way in the research laboratories. We should look into these laboratories to gain a picture of things to come.”[3] Based on this quote, the documented design process in the Saarinen office, and Bruno Latour’s definition of a laboratory (as the place where scientists work with their instruments),[4] I view Saarinen’s architectural practice as one of the many laboratories for a new architecture. Mapping such laboratories reveals a multifaceted view of postwar architecture, where modernism is no longer the universal panorama explaining architectural phenomena, but is rather explained by individual actors laboring – at their localized sites – to mediate a particular kind of modernity. This is to say, that modernisms are contingent and valid only within certain, historically, geographically, culturally and economically defined processes of modernization.

According to Eero Saarinen the office spent “so much time traveling, that we know only too well the physical comforts required by today’s travelers. Using materials and structural systems appropriate to this century of flight, we have tried to make a building which is functional, comfortable and dramatic.”[5] Therefore, the office approached the airport terminal design problem scientifically. They sent out teams with stopwatches and notepads to collect data on existing airports, researched the building type’s history, analyzed its organizational parameters and used scale modeling as a scientific tool to experiment with the terminal’s aesthetic form. They were especially concerned with the growing walking distances from curb to plane. Hence, Saarinen labored in the manner of what John Law has called a “heterogeneous engineer”[6] to negotiate technology and aesthetics. He managed networks including, not only clients, architects and engineers but also nonhuman actors such as the aircraft, Federal Aviation Agency’s regulations, and the various techno-social processes related to aviation.

With his laboratory-like methods Saarinen produced three revolutionary terminals. Trans World Airlines building became a landmark for TWA. It was a satellite terminal serving one airline within a decentralized airport city. Dulles International served as a monumental gateway to the nation. Its centralized gate arrival terminal and innovative mobile lounge concept awarded the then emerging bus system elegant space age aesthetics. Athens International was an essay in international modernism and an entrance point to the country. Typologically it was a centralized open finger terminal with the principle façade facing the airfield. Each one of these terminals found predecessors in the history of the building type, and gave the airport terminal a stunning aesthetic form, while innovatively interpreting its organizational principles.

What is more, Saarinen was negotiating technology and aesthetics not unlike the early modernists, who aimed to find a new synthesis in what they called the “new tradition” or the “machine age.” But Saarinen’s synthesis went further. He was not merely looking for an architectural equivalent of the machines: he was integrating technology into the very architectural object. In fact, the mobile lounge as a large, lounge-like vehicle employed at Dulles to transfer passengers from the terminal to the aircraft, became a constituent element of the new jet airport. It was a technological artifact, envisioned by an architect and realized by engineers, and it merged technology with the architectural object. Thus Saarinen’s buildings were not merely representing machine aesthetics in the manner of early modernists, but his buildings were (admittedly aesthetic) machines for transferring people from the landside to the aircraft.

In my study I show, how Saarinen’s engagement with technology, and his laboratory-like working methods reconciled the contradictions between modern architecture and its blind spot, the airport terminal. This synthesis allowed the terminal building to transcend its utilitarian-technological nature as transportation infrastructure and led to its inclusion in the history of modern architecture as a building type that has its own history and parameters for design. Hence, the airport terminal emerged as a specific landmark and a node in the networks of technology and modernity. According to Saarinen: “An airport should be an expression related to flight. It should make one feel the excitement of arrival and departure and the pleasures of adventures of travel.”[7]

My dissertation thus makes three contributions. It outlines the history of the airport terminal, emphasizing buildings that could have easily found their place in the canon of modern architecture. It explains the reasons for their exclusion and suggests ways to reduce the canon’s myopia towards variants of modernism. More broadly, this study contributes to our understanding of the historiography of modern architecture and its logic of including emergent buildings, by acknowledging the airport terminal as an emblematic building type of the twentieth century.